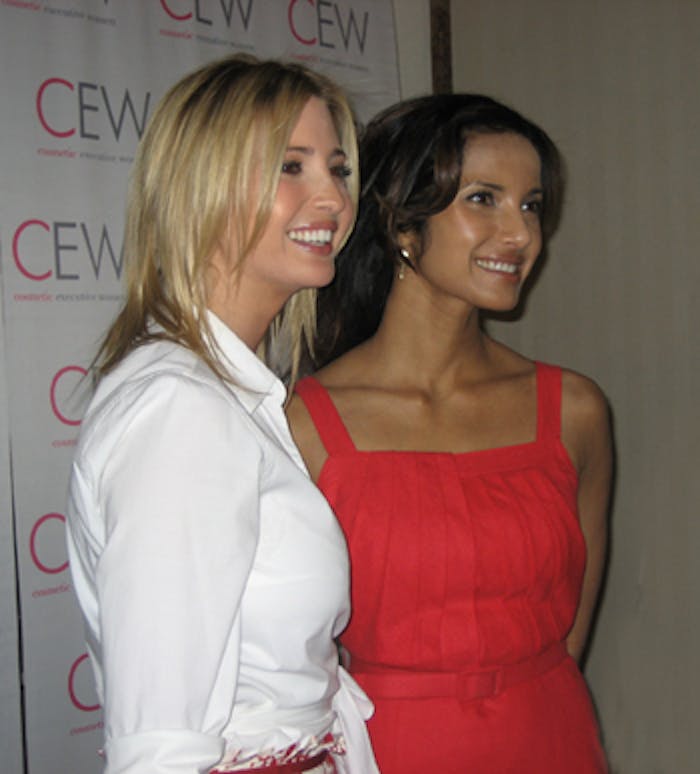 Ivanka Trump and Padma Lakshmi
On May 2, 2007, Cosmetic Executive Women (CEW) celebrated the most innovative beauty product launches of the year at New York’s Waldorf-Astoria. For more than a decade, the CEW Insider’s Choice Beauty Awards have recognized the best in beauty. The electricity was palpable at the star-studded celebratory luncheon, hosted by Sex and the City star Mario Cantone and introduced by Carlotta Jacobson, president of CEW, and Nancy Berger Cardone, publisher of Allure.

In her introductory remarks, Cardone noted, “The $50 billion beauty industry is dynamic,” and added, “Antiaging is one of the largest markets.” Apropos of the antiaging market, Cardone mentioned a finding in Allure’s recent survey that revealed, “Boomers see themselves as 12 years younger then they are.” In addition, the dynamic beauty market welcomes 8,000 beauty SKUs each year, clearly indicative of the competition in the market. Celebrities in attendance included fashion model and businesswoman Ivanka Trump, Top Chef host Padma Lakshmi, actress Sherri Saum, model Crystal Renn, actress Naomie Harris and Shear Genius judge and celebrity hairstylist Sally Hershberger.