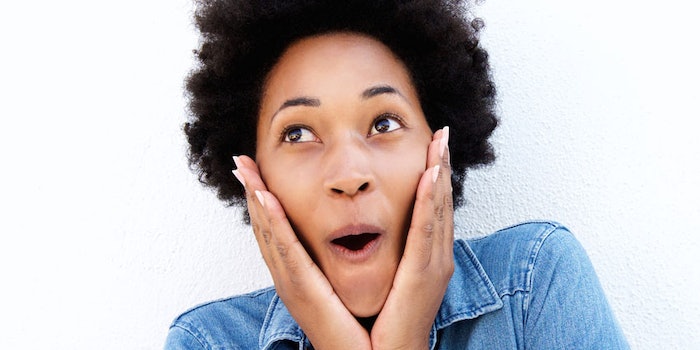 Personal Care giant Kao Corp. has been toying with consumer emotions for years—but with good intentions. The physical pleasure of applying cosmetics has been linked not only to positive emotional response, but also improvements in appearance.

The company recently highlighted findings from a series of studies presented earlier this year at the 82nd SCCJ Research Debate in Osaka, the 20th Annual Meeting of Japan Society of Kansei Engineering, at the IFSCC Congress in Munich, and others.

Oxytocin at the Pleasure Center

Research initially focused on the production of oxytocin, a hormone synthesized in the hypothalamus of the brain whose secretion is promoted by positive physical contact. This hormone serves to establish emotional attachment in relationships, reduce stress and stabilize emotions.

Kao's studies first measured levels of oxytocin secreted in the saliva of test subjects exposed to pleasant tactile stimulation. This allowed for the development of an emotion evaluation scale, which served as the basis for future work. Then, oxytocin levels were correlated with parameters for skin appearance to determine whether increasing oxytocin could improve skin conditions. More recently, increased levels were linked to improved skin radiance and clarity.

In the first study, saliva was collected from 33 women aged 20-49 years without major skin problems. Subjects were then instructed to use tactile stimulation on the outer forearm using a cheek brush to create pleasant feelings.

In the second study, salivary oxytocin levels were measured in 89 women aged 20-49 years without major skin problems. In addition, their visual skin condition—including skin texture, evenness of tone, complexion and surface smoothness—was evaluated using a 7-point scale by sensory experts trained in visual assessment. A weak positive correlation was found between the salivary oxytocin level and the skin appearance score.

A third study sought to confirm results of studies one and two. Here, 40 women aged 20-49 years without major skin problems used a specified procedure for their skin care routines: touch the face softly with the palms of both hands for 30 sec, remove hands and rest for 30 sec; repeat five times.

Before and after tactile stimulation, saliva was collected and the change in oxytocin levels calculated. In addition, feelings of pleasure were evaluated and represented on a visual analog scale to calculate differences before and after the tactile stimulation. Results showed a weak positive correlation between the change in salivary oxytocin levels and differences in the values for pleasure.

Research suggested the activity in the prefrontal area of the brain increased in response to the level of positive emotion aroused by facial skin touch using bare hands to apply skin cream.

In related work, Kao Corp.'s Kansei Science Research highlighted studies of seven types of cosmetics that provided different textures upon application, and whose effects on users' emotions were assessed. This work was previously presented at the 21st Annual Meeting of Japan Society for Research on Emotions, held in May 2013.

Two studies included 29 women each; study 1 focused on women in their 30s and study 2, women in their 20s and 30s. In each study, participants used four types of creams, i.e., fragrance-free or color-free, etc., for three consecutive days. Subjects were given the option to use morning skin care but mandated to use skin care at night.

After three days, participants evaluated the application texture of each sample as well as their emotions during the use of nighttime skin care. Results showed a significant difference among multiple emotional factors in both studies 1 and 2. This confirmed that different emotions were evoked by different samples used.

Correspondence analysis was then used to evaluate textures and emotions evoked during use of each sample, and these results were mapped. The study revealed the emotion evoked was different according to the texture produced while applying a given cosmetic. This confirmed that the texture perceived during product application influenced the users' emotions.

For this work, 20 women aged 20-49 years were monitored using near-infrared spectroscopy (NIRS) under three conditions: one using bare hands to touch their face, another where rubber-gloved hands touched their face and a third where hands were only placed near the face. Touching occurred for 15 sec, with a rest period for 20 sec, then the cycle repeated six times.

NIRS showed that touching the face with bare palms significantly increased the change in blood flow in the prefrontal area to a degree higher than the resting state. In addition, a moderate positive correlation was observed with both the blood flow change due to bare palms; vs. the other conditions; and the difference in positive emotion.

In a related study, 15 women aged 20-49 years applied four types of cream with different application sensations (creams A, B, C and D) to the insides of their forearms. Changes in cerebral blood flow on application were measured by NIRS. Touch was experienced by applying cream for 20 sec, resting for 20 sec, then repeating the cycle four times.

Results confirmed that the change in blood flow varied depending on the sensation during application. Cream C, which had a rich, moisturizing feel and blended with the skin favorably, showed a significant change in blood flow. Thus, the research suggested the activity in the prefrontal area of the brain increased in response to the level of positive emotion aroused by facial skin touch using bare hands to apply skin cream.

The most recent study looked at changes in skin induced by positive emotions propagated by touch. Eighty women aged 20-39 years without major skin problems used a test cream twice daily for four weeks. Each subject's skin was evaluated on a 7-point scale by sensory experts trained in objective visual assessment.

Results confirmed increases in salivary oxytocin due to the continuous application of tactile stimulation.

Kao Corp. is not the only company working in this emotionally charged space. As previously reported, LVMH is interested in emotion-driven perceptions of age, and have found that men perceive women's age more modestly and sensitively than do other women. Also, Emospin and the University of Tours, France, in conjunction with Chinese manufacturer PECHOIN, have identified an apparent synergy between traditional Eastern herbal medicine and Western peptide technology not only to impart anti-aging effects, but also a synergistic sense of happiness and well-being.

Finally, IFF/Lucas Meyer studied the "happiness" effects of its phospholipid emulsifiers by measuring in users facial microexpressions and variations in vocal intonation, as well as dilation of the pupils and electrodermal response triggered by excessive perspiration. The company presented its "Happiness in a Jar" concept at in-cosmetics Barcelona in 2015.

Editor's note: These are just a sampling of the ingredients promoted for such benefits. Visit the free online Cosmetics & Toiletries Bench Reference (CBR) directory to search for others.

Starting on Oct. 1, 2022, China’s National Medical Products Administration (NMPA) will only issue registration certificates, including those that are updated or extended, for special use cosmetics and new ingredients electronically.
Aug 26th, 2022