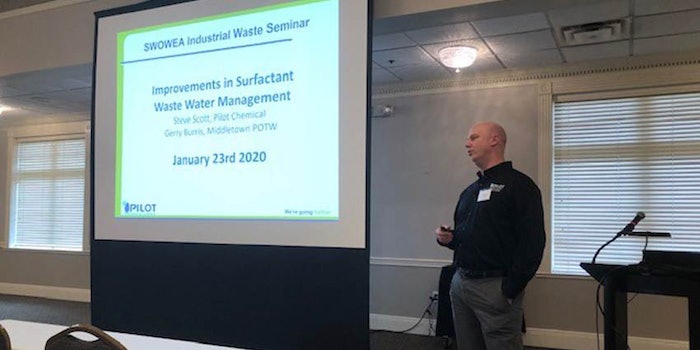 Pilot Chemical Company has earned the Karl G. Voelkel Industry Award for its outstanding environmental achievement at its plant in Middletown, Ohio.

Pilot Chemical Company recently earned a prestigious regional award that not only recognizes its environmental efforts but also represents a deepening of its relationship with city officials.

Bestowed on companies that have improved the water environment in Southwest Ohio, the award recognizes contributions in waste minimization, pollution prevention, environmental compliance and environmental stewardship.

Cincinnati-based Pilot earned the award for wastewater improvements and accomplishments at its plant in Middletown, Ohio. The fact that it was nominated by Middletown officials makes the recognition even more special, said Steve Scott, production manager for Pilot’s Middletown plant.

To strengthen its environmental efforts around wastewater in Middletown, Pilot invested $200,000 in automation and in-line sensors and enhanced its operating procedures. The award recognizes those measures, as well as Pilot’s redoubled efforts to understand the city’s requirements and operational challenges; capture tank clean-out waters that can be sold as low-grade surfactants; and change its approach to manage wastewater.

The Southwest Section of the OWEA presented the Voelkel Award to the Pilot team at its January 23, 2020 Industrial Waste Seminar meeting. Following the meeting, Scott addressed the attendees to share lessons learned from the closer collaboration between Pilot Chemical and the city of Middletown.

“Receiving the Karl G. Voelkel Industry Award is a significant achievement for Pilot Chemical and the Middletown plant,” Scott said. “It recognizes the hard work we put into improvements in our wastewater management process, and it is an affirmation that we are doing the right things to be good corporate citizens in the communities where we live and work.”