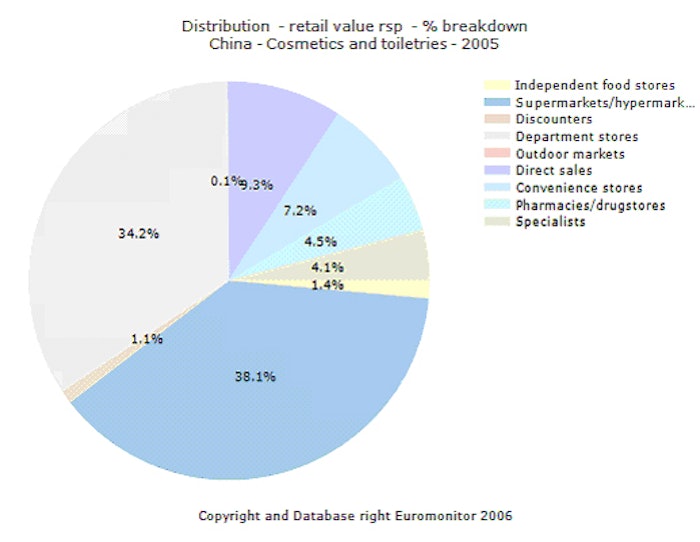 Distribution of cosmetics and toiletries in China, 2005
The rapid growth of modern retail channels such as supermarkets, hypermarkets and chained drugstores in China have been an important driver for the cosmetics and toiletries industry, which grew by nearly 11% between 2004-2005, according to a new report from Euromonitor International – “Cosmetics and Toiletries in China”. Providing a clean, comfortable shopping environment, and showcasing a wide variety of products and brands, these channels provide consumers with a new shopping experience, and have helped raise awareness of emerging products such as men’s skin care and deodorants.

In addition, the expansion of these modern channels has helped consolidate the distribution network, and provide relative ease for the top brands to further their national expansion. Manufacturers are also able to liaise directly with these chained retailers rather than going through third-party wholesalers and distributors, thus losing control over their brand image and product positioning.

The lifting of the ban on direct sales in China was a much-anticipated event in 2005, with most players taking a conservative, wait-and-see attitude. Most players indicated that lifting the ban would have a limited impact on overall sales in the short term. This is because key direct sales players Amway, Avon and Mary Kay, as well as the emerging NuSkin, have been able to build strong sales performances through their single-layer direct sales model. This entails their direct sales personnel being tied directly to the specialist retail outlet, rather than the traditional model of selling door-to-door, that is commonly used worldwide.
Interesting Stories