Saffron in Perfumery and Flavors

I’ve frequently used saffron in perfumery because it is an indispensable ingredient of what we call “East-West” and Oriental accords. True saffron attar, a treasure which has sadly almost vanished, contains the full range of saffron volatiles co-distilled in a sandalwood medium. In this genuine, pure form, it has an herbal-hay (the best adjective for describing saffron), milky-woody and honey character that mixes extremely well with the so-called shamama-tul-amber attar and agarwood oils.

Saffron attar also mixes very well with exotic and unknown flowers such as frangipani, champaca, magnolia, gul hina (flower of paradise), kewra, gardenia, jasmine sampac and auriculatum, and the extraordinary nittymallige. In fact, the range of materials with which saffron attar mixes well is vast: orris derivatives, such as the absolute or the concrete; Burley tobacco absolute; osmanthus absolute, with which the attar forms accords of extreme olfactory beauty possessing a fruitiness that is in the heart of many of my successful creations; opoponax; irone; and the extraordinary dihydro-irone, the coveted and heavenly “myrrhone.”

My work to understand the chemical reality of the saffron essential oil or absolute required Spanish saffron, since Spanish saffron is generally accepted as being the best in the world. Thirty years ago, Spain dominated the market in saffron. Now, however, the country produces only around 1,500 kg of saffron with the official denomination of “Mancha,” and around 1,500 kg of pure Spanish saffron without the official denomination of origin (a product that is as good as Mancha, but slightly cheaper). Few people are exposed to the pure Spanish oil, since 95% of today’s world production is Iranian-derived, due to a cheaper price. Most of the “Spanish” saffron sold on the market is just a mixture of the genuine Spanish and Iranian varieties.

Saffron is derived from the saffron crocus (Crocus sativus).1 The flower’s three red stigmata are collected and dried before use as a spice or coloring agent. In the Middle East, particularly Iran, Turkey and Syria, and in the Indian subcontinent, saffron is used in delicious sweets and ice creams. Unfortunately, this tradition has not spread to Europe, Japan or the United States, where it is only used in rice preparations, or sauces paired with fish and seafood dishes. By weight, saffron is the most expensive spice. Pure Spanish varieties with origin denomination cost $2,700/kg in bulk.

Saffron’s characteristic scent and taste are due to many ingredients, including picrocrocin, safranal, carotenoid dye and a-crocin, which imparts a rich golden-yellow hue to food. The spice is used extensively in Asian perfumery, particularly traditional Indian perfumery, where the original “saffron attar” is produced by co-distilling Kashmir saffron with sandalwood. (Safranal also has many medicinal applications.) Saffron is also employed widely in the Middle East, and beginning to find use in Western perfumery. In the West, formulators don’t use the natural product, but rather synthesized safranal.

For more details from the author, including technical information, the full article is available through www.PerfumerFlavorist.com/articles. 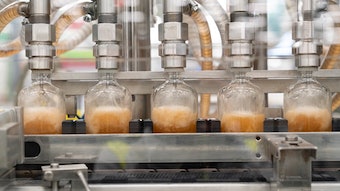