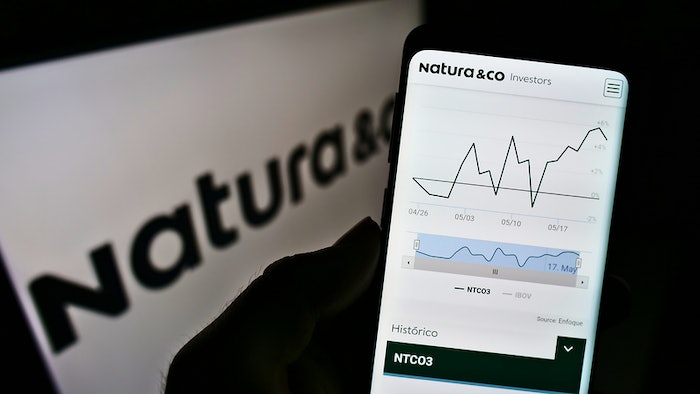 Nature &Co., the owner of the The Body Shop, Avon, Natura and Aesop, reported a net profit loss for the second quarter, citing a challenging macroenvironment that continues to pressure its operating costs and margins.

Brazilian cosmetics company Natura &Co reported a net loss for the second quarter, citing a challenging macroenvironment that continues to pressure its operating costs and margins.

The owner of Avon, Natura, The Body shop and Aesop posted net income of $766 million reais for the second quarter. Adjusted EBITDA came in at 8%, down 50 basis points.

The Natura brand posted strong 14.8% growth in Latin America at constant currency (up 12.2% in BRL) in the quarter. Growth was mainly driven by Argentina and Colombia, offsetting a decrease in Chile.

Avon International's net revenue decreased 11.4% at constant currency (down 25.4% in BRL) in Q2. Performance was mainly impacted by the war in Ukraine (excluding Russia and Ukraine, sales were down 5.8% at constant currency), low consumer confidence and eroding household purchasing power in Europe as well as fewer representatives in Europe.

Avon International’s adjusted EBITDA margin stood at 3.3%, a decrease of 100 basis points compared to the second quarter of 2021.

The company blamed substantially higher cost pressure, the impact of the war in Ukraine and lower volumes, mainly in European markets. These were partially offset by an effective revenue management strategy across markets and cost reduction resulting from strict financial discipline and a leaner operating model.

The Body Shop's net revenue was down 11.8% at constant currency (down 25.3% in BRL) in Q2, mainly impacted by post-lockdown channel rebalancing, as the decrease in sales at TBS At Home and e-commerce outpaced the progressive retail recovery.

The Body Shop’s store revenues were up compared to the same period last year (excluding buybacks), with growing footfall, albeit at a slower than expected pace, and are still trading down compared to the second quarter of 2019.

Franchisee sales posted a decline in the second quarter, but are showing increased retail sales month on month, further reducing inventory as they recover from lockdowns.

Aesop posted another excellent quarter, with net revenue increasing by 24.5% at constant currency (up 5.7% in BRL).

All markets for Aesop delivered double-digit growth, led by North America and Asia-Pacific.

Aesop continues to consistently post superior sales growth on a like-for-like basis, improving overall store productivity, while continuing to roll out new stores in new cities such as Madrid, Spain, and Cambridge, England, as well as in existing markets, such as Japan, South Korea, Canada and Australia.

Fabio Barbosa, group CEO of Natura &Co, declared: "In my first few weeks as group CEO, I have focused mainly on two priorities: the first is redesigning Natura &Co's organizational structure to make it lighter and leaner. At this stage, we have mapped significant savings at the holding company level. If the company had implemented those changes last year the impact would have been an annualized reduction of at least 40% in recurring corporate expenses. Other changes and estimated savings will be announced later.”

He added, “The second is a review of the governance model and ways of working within Natura &Co, with the holding company strongly concentrated on defining key performance indicators, monitoring and tracking the performance of more autonomous brands, leading the allocation of resources within the group and continuing to promote our 2030 Commitment to Life sustainability vision.

“We are confident that a leaner and a more agile structure, built on a strong foundation of accountability for results, will empower the business units to respond with agility to their current strategic and market challenges,” Barbosa explained. “At the same time, we are strongly focused on improving the fundamentals of our underperforming businesses, which we regard as our principal challenge and main upside driver.”

Barbosa continued, “Though we expect our businesses' revenues to trend better in the second half of the year, we believe the challenges in the macro environment will persist, and our margins will remain pressured in the short term. In this context, our clear and immediate priority is to focus on margins and operational cash-flow, and the teams at all our brands and businesses are mobilized and incentivized on those clear goals."