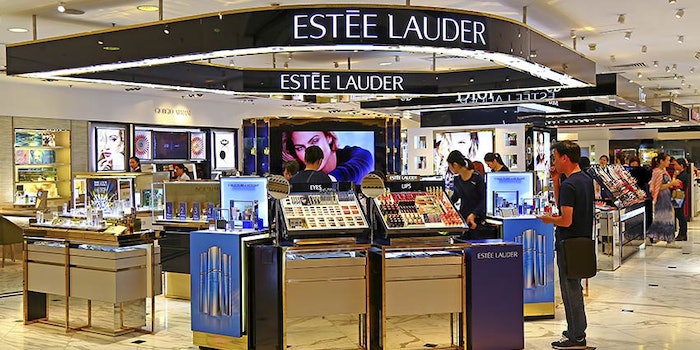 Estee Lauder has released its unaudited fiscal results for 2018 Q2, which ended December 31, 2017.

Net sales were reported at $3.74 billion, 17% over 2017 Q2 ($3.21 billion). The company noted that two of the company’s fiscal 2017 second quarter acquisitions—Too Faced and Becca—contributed around 2% of the reported sales growth.

Skin care reported net sales of $1.494 billion, a 20% increase. The sharp increase was attributed to double-digit gains in the Estee Lauder, Origins, La Mer and Glamglow brands, as well as strong growth in Clinique. This growth offset lower sales from the Aveda brand.

Makeup net sales were reported at $1.515 billion, a 16% increase over the same quarter last year. The aforementioned Becca and Too Faced brands, as well as double digit gains from Tom Ford and Estee Lauder, were noted as growth drivers. MAC saw strong growth in Asia-Pacific—Hong Kong and China in particular—as well as travel retail.

Among specific products, Tom Ford’s eyeshadow and lip color subcategories, and Estee Lauder’s Double Wear foundation, were noted as sales drivers. The report explained that “increases were partially offset by lower makeup sales in the United States, reflecting slow foot traffic in some US brick-and-mortar stores.”

The hair care segment reported a 5% increase, bringing in $144 million. The Bumble and Bumble brand reported growth, driven by its launch in Ulta Beauty, while Aveda grew due to solid online performance. Both brands were adversely impacted by softness in the salon channel, and, for Aveda, lower sales in freestanding stores.

Regionally, the company also saw significant gains in  Asia-Pacific and Europe, the Middle East & Africa. Net sales outside of the United States were favorably impacted by the dollar’s weakness in relation to other currencies.

“Our strong results, combined with future benefits we expect from the passage of the new Tax Cuts and Jobs Act, further enhance our ability to strategically invest in faster-growing areas of prestige beauty to attract new consumers,” said president and CEO Fabrizio Freda. “Our strategy is sound and effective, and we have the brands, resources and talent to continue above-industry growth in our second half and full fiscal year.”