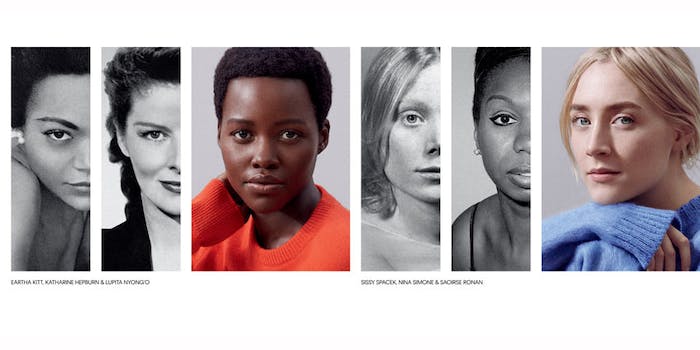 Lupita Nyong'o and Saoirse Ronan have been named the faces of Calvin Klein Women. In the print campaign (pictured above), both actresses are featured alongside women who have inspired them, including Eartha Kit, Katharine Hepburn, Sissy Spacek and Nina Simone.

Simons was quoted saying, "With this fragrance, we wanted to put the concept of plurality center stage. The campaign is an exploration of femininity—a group of women bonded by a common thread; the desire to have the power to create their own identity and to support and lead the way for those that come after them. Calvin Klein Women is inspired by the transmission of strength and inspiration from one woman to the next; by plurality combined with individuality; freedom of expression; and the notion that the collective is as vital as the individual.”

According to the brand, the fragrance is "a play of contrasts, as infinitely varied as the personas of the women who inspire it." Notes include a woody floral, eucalyptus acorns, orange flower petals and Alaskan cedarwood.