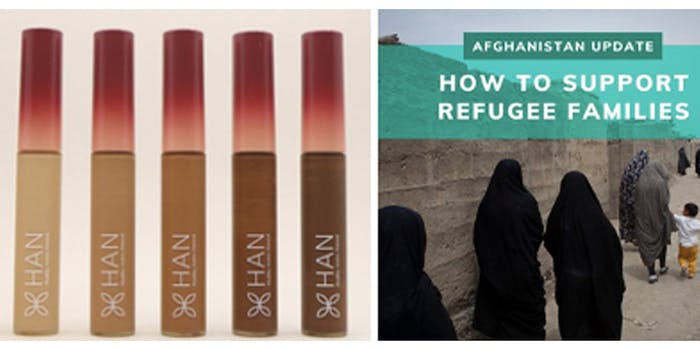 A portion of concealer sales for the remainder of the month are going to Women for Women International.

Han Skincare Cosmetics will be donating 10% of its concealer sales for the remainder of the month to Women for Women International, a non-profit organization that helps women survivors of war and conflict rebuild their lives, as the humanitarian crisis in Afghanistan continues.

Meanwhile, Prai founder Cathy Kangas has been campaigning to rescue members of U.K. Charity Nowzad, which reunites soldiers with the dogs they befriended while on tour in Afghanistan and has run a veterinary hospital in Kabul.

Kangas has stated, “Boris Johnson has verbally agreed to give visas to all the members of the Nowzad team, and to take in the animals to the U.K. They have the cargo plane paid for and ready to go. The visas are not yet formally issued, just verbally agreed to.”

She added, “Pen Farthing [Nowzad's founder] is a Royal Marine, he served his country faithfully for years. He is CNN Hero of the year for 2014. The people he is bringing into the U.K. are educated and trained veterinarians and will not be a drain on the country, they are assets."