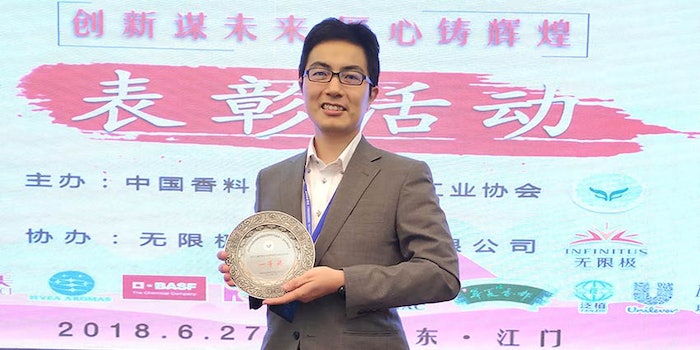 Shiseido took home three prizes at the 12th China Cosmetics Academic Research Conference. Hosted by the China Association of Fragrance, Flavour and Cosmetic Industries (CAFFCI) in Jiangmen, Guandong, China, the conference is held once every two years. Participants include companies, universities and research institutes from China and abroad. Research papers are selected based on “outstanding results that will contribute to advancing technologies in the Chinese cosmetics industry.”

New Insights into the Development of Anti-aging Skincare Cosmetics Focusing on the Primary Causes of Wrinkles by Yusuke Hara, Shiseido Research Center—Body sites that are prone to wrinkling undergo a high degree of motion during facial expressions; therefore, skin motion may be an essential factor in wrinkle formation. Researchers confirmed an increase in wrinkle volume immediately after facial expressions. These resulting wrinkles were referred to as residual wrinkles, and the mechanically deteriorated stratum corneum (SC) was suggested to be primarily responsible for their formation.

An efficient method for repairing deteriorated SC was demonstrated to be the SC hydration–dehydration process, which could be controlled by skin care product ingredients or formulations. In Shiseido’s previous studies, polyoxyethylene/polyoxypropylene dimethyl ether was confirmed to enhance the SC hydration–dehydration process. It also suppressed the formation of residual wrinkles by keeping moderate moisture in the stratum corneum, and repaired the residual wrinkles formed. These results offer new insights into the development of daily anti-aging skin care cosmetics.

This research revealed that cavitation significantly decreases skin elasticity and promotes sagging, and that age-induced cavitation is closely connected with atrophic sweat glands. This further implies that sweat glands shrink upwards with aging and create cavities in the dermal layer, ultimately resulting in skin sagging. As for a means to improve cavitation, researchers identified, for the first time, that rosemary extract can attract adipose tissue-derived stem cells (ADSCs) and activate dermal tissues, establishing a three-dimensional dermal structure.

A Novel Mechanism of Cutaneous Aging Mediated by the Impairment of Lymphatic Function and the Protective Role of a Lymphatic-promoting Compound  by Kentaro Kajiya, Shiseido Research Center—Skin aging is thought to be caused partly by the deterioration of the inner body, particularly the circulatory system, which is composed of blood and lymphatic vessels. However, few studies have been conducted on the functions of lymphatic vessels in skin aging.

By visualizing the lymphatic vessels in the skin, Shiseido successfully revealed that:

3) Fatty acids in the lymph promote hyper-permeability of lymphatic vessels, leading to an increase in adipocyte accumulation.